Article published in the 23rd January 2016 edition of The Times,

Why learning French (again) is magnifique.

She stayed with her daughter at Parfum de France for a 5-day immersion course in summer 2015. I’m so excited that both of them made the most of it! Sylvie

I’m struggling to express myself on a range of topics, from the immigrant crisis to subsidies for European farmers. It’s not that I don’t have opinions. It’s because we are speaking in French — or rather, everyone else around the dining table is.

I appear to be enacting comedian Eddie Izzard’s sketch “le singe est sur la branche” as I try to twist what little French vocabulary I have to fit the occasion. I’m not sure how my long-suffering hosts Nadine, who I met when I was 15 on a school exchange trip, and her husband Eric keep their faces straight.

Neither Nadine, nor I, left school with any useful language qualifications — Latin GCSE not being all that helpful — and over the years our enthusiasm for writing in each other’s language has waned. Correspondence was briefly rekindled with the discovery of Google Translate, with some hilarious results. I visited from time to time relying on more fluent boyfriends to lead the conversation. Then ten years ago, I ran out of French-speaking boyfriends and communication virtually stopped.

Now I am back sitting in their farmhouse kitchen just outside Angers in the Loire Valley, because my 13-year-old daughter, Natasha, and I are on our way to spend a week on a French language immersion holiday. The plan had been to do the course and then come and show off our finely honed language skills but, for a variety of reasons, I’m attempting to discuss the Syrian situation, in French, the evening before our course begins.

It is no coincidence that my school exchange trip and the language course were both in the Loire Valley. It is here that the purest French is said to be spoken. This is the French of textbooks, untainted by heavy accents, making the area a focal point for language students.

Natasha and I are guests in the home of language teacher Sylvie Reeves and her English husband, Mark, in the village of Fontevraud just outside Saumur. Reeves runs the Parfum de France language school where she offers guests the option of staying in a gîte (which sleeps six) or next door in a double en suite attic room in the main house. Some meals are taken with Sylvie and Mark and, depending on your language ability, will be accompanied by conversation in French.

The lessons and activities are tailored to the students but Reeves’ speciality is pairing English and French students, with each speaking the other’s language. This is a lot more fun than expected.

We meet Lydia Labalette, the director of innovation at the local abbey, Abbaye de Fontevraud. Labalette and I get along and chat easily: her in English, me in French. During an abbey tour, she details the rich history and the modern art installations. Reeves prompts us from time-to-time to elaborate or to ask certain questions and also, rather disconcertingly, scribbles notes about our performance on a clipboard.

Natasha and I also tour a sparkling wine company, Louis de Grenelle, in Saumur. Here, we are shown around miles of underground tuffeau caves and taste wine with two of Louis’s grandsons, Etienne Bodet and Charles Flao, who are also learning English with Reeves. It feels like we are getting an insider’s view of local sites, having fun and learning French at the same time. Well I am. Natasha has hardly said a word.

But then my daughter was less than enthused about our trip. “Speaking French and having lessons — you call that a holiday?” she said in horror when I told her about the plan. Once at the Reeves’ home, she made friends with the cat and seemed happy swimming in the pool.

The first formal lesson, though, is a shock for both of us. Simply concentrating for two hours in a classroom is challenging. My confidence plummets as the inadequacies of my French grammar are exposed. We are set homework each day and I spend a lot of time on it, feeling despondent at my lack of ability. Natasha reads The Hunger Games and mocks me for trying to impress the teacher.

My daughter does, though, come to life during a cookery lesson with Fabrice Bretel, a chef and owner of La Licorne restaurant. Bretel doesn’t speak any English but has a great sense of humour and conveys a lot with a smile and shrug. Following his instructions we stuff carrot purée into penne, make garlic mushroom polenta, and bake duck in salt with lavender. It is one of the highlights of the holiday.

On the last day Reeves suggests that Natasha and I have separate lessons. I have a mind-boggling hour-and-a-half of grammar. Natasha has half-an-hour of playing Scrabble in French, which she declares “a lot of fun” — high praise from the less-than-effusive teenager.

Not all our time is taken up with lessons. Natasha and I have plenty of opportunity to explore on our own. We visit the famous Cadre noir riding school in Saumur, the nearby château at Montsoreau, and a host of great restaurants. Towards the end of the week, over pancakes stacked high with chocolate and cream, I ask for her views on the holiday. “I’ve learnt more French in the five days here than I have in five years of lessons at school,” she says.

On our last evening we meet Labalette for drinks and a meal in the abbey’s swish new hotel bar and restaurant. Labalette and I decide that we would like to stay in touch. So, 30 years after my first trip to the Loire I have recruited a second penpal. Hopefully next time we meet, I won’t be lost for words.
Need to know
Carol Lewis was a guest of Parfum de France (00 33 2 41 51 78 74, parfumdefrance-fr.com) which offers week-long, French immersion courses from €1,600pp (£1,220), including B&B, dinners and lessons. Train travel from London to Samur costs from £100pp (0844 8485848, voyages-sncf.com)

With Carol, one of my students, we are running through... END_OF_DOCUMENT_TOKEN_TO_BE_REPLACED

With Carol, one of my students, we are running through... END_OF_DOCUMENT_TOKEN_TO_BE_REPLACED 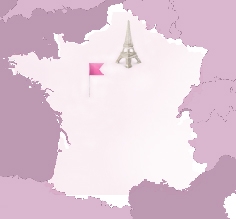